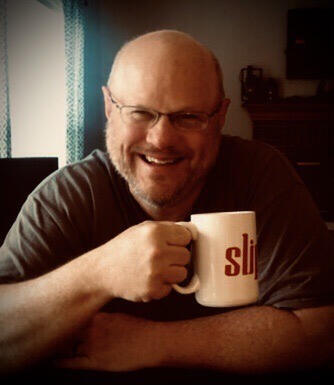 I'm a writer, husband, father, and scrambled eggs maker, not necessarily in that order. I have more than 20 years of experience in brand, copy, and creative direction. Currently, I'm the senior copywriter at Horizon Hobby, where among other things, I serve as the Managing Editor of Transmitter Magazine.My personal projects include the children’s book, Goodnight Princess, and the noir-tinged fumetti The Beautiful Kill. My latest book, Captured Ghosts, is coming soon.I live and work in Champaign, Illinois with my beautiful and talented wife, Maria. We have three incredible daughters: Katie, Alia, and Brynne. The only other male in the household is Rocco, the cutest Teddy Bear dog in the world. I am outnumbered.

I Should Hate Football, 2021
I don't, but I should.All That Once Was Good, 2021
Baseball has always been there.And the Thunder Rolls, 2020
Heart to heart.A Star Wars Story, 2020
What went wrong with the sequel trilogy.Umpin’ Ain’t Easy, 2018
You make the call.

Same As It Never Was
A garage sale iPod contains some interesting music.Prospero and Guano Island
A secret agent runs into a sticky situation.

I Should Hate Football

I should hate football.While I admit I’m not a crazy fan of football, I do enjoy watching it. I probably shouldn’t.Contrary to what my mother-in-law got stuck in her head a few years ago, I do not root for any NFL team. I did get caught up in the Greatest Show on Turf stuff with the St. Louis Rams (which is what my mother-in-law was referencing), but that’s about as close as I’ve ever gotten to “rooting” for an NFL team.When I was pretty young, my Dad got me kid-sized pads and a helmet. He choose the Chargers because he thought I’d dig the lightning bolts on the side. He wasn’t wrong, but it was one of those times where I remember distinctly not having an NFL team to follow. My family was not a Bears/Bulls/Blackhawks/Cubs/White Sox family, so the Bears never entered the equation. The Colts were not a team I could get behind. The only two NFL games I’ve ever attended were a St. Louis Cardinals game at old Busch Stadium back in 1985 when I was still in high school and a Rams game in 2003, mostly accompanying my Dad and one of his friends.This leads me back to why I should hate football.When I was eight years old, I was in an accident. It was nobody’s fault but mine. If you haven’t guessed, I was playing football in a couple of backyards, mine included. We had a wide variety of kids of all ages playing this particular game of pick-up football. I had just caught a pass and was tripped up by one of my friends, lost my balance, and fell into a bush because backyard pick-up football tends to have a few obstacles in the way like patios, trees, and bushes. I fell hard and completely knocked the breath out of myself. I remember trying to breathe and how much that hurt more than the pain on the right side of my face.A small branch about an inch and a half went under my eye and severed the optic nerve. Freaky accidents happen all the time, but I have never heard of a stick cutting the optic nerve and not injuring the eye itself at all. That’s what happened to me.My accident changed the direction of my life. My Dad played football and baseball, and I was likely destined to play both of those sports as well or maybe even better than my father. My mother would never let me play any form of football ever again, let alone high school football. I tried baseball, and I was pretty good until I was old enough for pitchers to start throwing curveballs and sliders. It’s tough to hit a baseball when it’s moving, and you have two eyes that can place it into three-dimensional space. For me, baseballs come in looking flat, and placing them in three dimensions is difficult. Have you ever reached for a light pull from a hanging lightbulb in a basement or attic and completely missed it? I have plenty of times because where my brain thought the pull was in three-dimensional space was not where it actually was if that makes sense.So, I became a track and cross-country athlete. I wasn’t great, but it was sports, and it was being part of a team, and I liked it well enough to basically build the cross-country team from scratch at Illinois College, where I was MVP and Team Captain at this tiny little Division III school. I once asked members of the University of Illinois cross-country team what their worse race time was, and I quickly realized my best time in four years could not even compete at the Division I level.I barely watched much football my entire high school, collegiate, and post-collegiate years. Sure, I tuned into a Super Bowl and went to a few Super Bowl watch parties, but I never had a team that I rooted for or cared about ever. To this day, I don’t have any kind of handle on players, coaches, or how good any one team is until division championship games and Super Bowls.You might think I hated the game or would tell others not to play because of how dangerous it is. I did none of that. Football barely registered in my life. I had an accident. It may have zigged the direction of my zag, but it never really defined me. It never comes up, and I hardly think about it.Then I moved to a college town, was gifted some tickets, and started loving going to University of Illinois football and basketball games. They were always events, and sometimes the teams were pretty good. Most time, it didn’t matter. Illinois athletics became the team I supported, followed, and cared about almost as soon as I moved to Champaign. There was a whole Saturday tailgate atmosphere during football Saturdays where I could take my young daughter and get her face painted, a few minutes jumping on inflatables, and maybe some ice cream at the end.Today, I went to the first college football game of 2021 at Memorial Stadium in Champaign, Illinois, to watch the University of Illinois Fighting Illini take on the Nebraska Cornhuskers. I invited my hometown neighbor… the guy who tripped me up playing backyard football in 1976, to come with me. We’ve been friends for years. He still lives in our hometown and is a successful dentist. Illinois is his alma mater, and I was thrilled to catch up with him and enjoy the afternoon.Illinois got the win with a score of 30–22. It was hot. It was loud. It was thousands of people all jammed in together to cheer on their team. I will admit when the orange and blue-clad squad took the field, I didn’t hate football at all.I never really did.

And the Thunder Rolls

My favorite B-movie is called Thunder Alley. I watched it again over the weekend and enjoyed every minute. This movie is so schlocky, it isn’t even out on DVD and I have a nearly worn-out VHS copy.In a time before Behind the Music explained how every band gets started and is torn apart by drugs, we get the story of Richie and Donnie. Donnie (Scott McGinnis, who never quite made it as a Tom Cruise-lookalike) has started a band named, of all things, Magic and wants his friend Richie (Roger Wilson of Porky’s fame… I guess) to join, but the lead singer, Skip (Leif Garrett in full curly blonde hair, pre-Behind the Music special and odd white boy dance moves mode) isn’t too keen on having the hick join his rocking band.Richie ends up having to sit in with the band while Magic’s current flashy and talent-less guitar player makes nice with the bathroom floor. Soon he’s in the band and they are on their way to local stardom playing clubs all across Nevada and Arizona. Meanwhile, their sleazy manager has been getting Donnie hooked on drugs, and when an overdose kills him, Richie is devastated. He learns who supplied Donnie the drugs, takes a sledgehammer to the sleazy manager’s expensive car and decides to pack in the rock and roll life. The manager tears up Magic’s contract and kicks the band off the bill of a huge festival where all the record company execs will be waiting to sign the next big thing.Enter Pre-Highlander Clancy Brown.Before old Donnie boy loses his battle with cocaine and speedballs, the band goes on a club tour with their road manager, Wessel (pronounced “Weasel”), played to perfection by Clancy Brown. He takes a shine to the boys in Magic and thinks there’s something special in their music.For no apparent reason other than they are both blonde, the sleazy manager thinks he can drop the current lead singer of the Judas Priest rip-off band, Surgical Steel, add Leif Garrett and make a million bucks. This is akin to asking David Lee Roth to be the new frontman in Iron Maiden.Wessel thinks this is stupid (as does most of the audience) and tries to convince Richie to join the bass player and drummer (Butch and Wolf, for those scoring at home) on stage after the Surgical Steel set at the big festival where, remember, all the record company execs will be waiting to sign the next big thing. Richie says no. The audience says noooooo!Richie’s girlfriend, played by second rate scream queen of the 80s and general hottie Jill Schoelen, tries to convince him to play. Richie can’t do it. The audience says noooooo!At the festival, Leif is watching Surgical Steel play. Wessel keeps the amps hot. The lights go down and Butch and Wolf take the stage. The lights come up and they start to play, but without Donnie, Richie or Skip, they got nothing.They start to get depressed and stop playing. All of a sudden, a screaming guitar can be heard. Richie is at the show and he brought his Les Paul! The festival crowd goes nuts. The members of Magic go nuts. The audience watching the movie goes, “duh… of course he’s gonna show up. It’s a movie!”The band plays a song for dearly departed Donnie and the festival crowd is in tears. They go into their up-tempo number, “Can’t Look Back,” and Richie asks Skip to join them on stage. The band is back together! Leif dances with his hands in the pockets of his jacket. He is sooooo cool. Clancy Brown smiles and the movie ends.I love everything about this movie from the cheesy songs, to the sleazy manager doing his best Boss Hogg imitation to the gratuitous nudity, to the ridiculous names (Skip, Butch, Wolf) and to Clancy Brown playing the good guy for once.It is sorta like Rock Star mixed with Almost Famous and every Behind the Music episode you saw except for the Weird Al Yankovic one. I think I’d pay big money for a DVD copy with the soundtrack.Anyway, that’s my favorite B-movie. What’s yours?

All That Once Was Good

Same As It Never Was